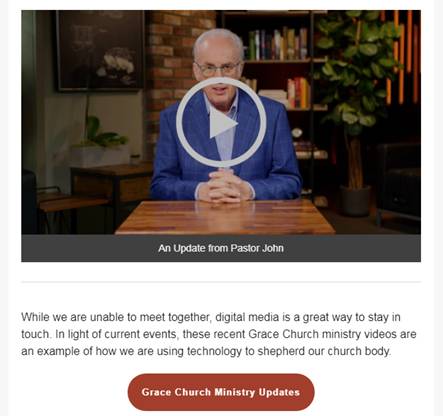 We’re thankful for what was accomplished in that conference. The goal of it was 2020 – clarity on issues, and we’ve gotten tremendous feedback on many folks saying – you know, things were made more clear to me; I appreciate everything… People appreciated the call to Biblical clarity that we opened with. I’ve gotten a lot of personal feedback on the final message on how important unity is to the Lord, not just to us, but to the Lord.

We’re already cranking up for next year. And next year is going to be remarkable. I can tell you that. Next year, 2021, is going to be special for a lot of reasons. But one of them that I want to mention to you immediately is this.

Something has happened that just doesn’t happen. I’m still in awe at the kindness of the Lord. And it is this. As an expositor of the Word of God, I want the finest tool that I can use to handle Scripture. That means, the most accurate, literal, faithful, consistent translation of Scripture. As an expositor, I don’t want to fix the text. I don’t want to say they should have done this or they should have done that. I want the purest translation. And basically the general consensus has been for many, many years, that the NASB is that most accurate, most literal, most consistent translation. It’s been mine for the whole duration of my ministry. All the commentaries I wrote were based upon the text of the NASB. It has stood the tests of these years of exposition. It is still my favorite. I have found it the best possible tool for handling the Word of God.

But, there is an opportunity that has come to us that is going to make it even better. The Lockman Foundation generously and graciously has licensed us to able to take the NASB translation, and to refine it. To do some refinements that are subtle, that you might not even necessarily see as you’re reading. Sometimes changing an imperfect tense verb that it reads in the English as an imperfect tense. Sometimes changing the translation of a word where a synonym is used to another word that recognizes a word-play in that text and will make that word-play more clear. There are subtle changes like that. Some large changes – God’s Name is Yahweh in the Old Testament. He says, My Name is Yahweh, I AM that I AM. But that always appears as Lord. That’s not what the original word is. Lord is the word Adonai – that’s a different Name for God. The word Yahweh, God’s Name, appears over 6,000 times in the Old Testament, and God says, this is My Name.

Now the Jews didn’t want to pronounce that Name, because they said that God is too holy. So, they substituted Adonai and substituted the word Lord for His Name, because they thought it was too holy to pronounce.  Look, God gave us His Name so that we would use it. God wants us to call Him by Name. He calls us by Name. He wants us to call Him by Name. That distinguishes Him from the generic word God. There are many gods. Even in the Old Testament, sometimes the word God is plural and sometimes it’s used in a reference that doesn’t refer to Yahweh.

So one remarkable change in this Bible, this new edition of the NAS is going to be that God’s Name is going to be His Name. And then in the New Testament, some of you know I wrote a book called “Slave”, and that book kind of sadly pointed out that the word “doulos” which is a companion word to “kurios” – “kurios” is Lord, “doulos” is slave, is not translated slave the way it should be all through the New Testament, and so we’re going to make that change. Those two are pretty-epic changes in the Old and the New Testament.

The rest of the refinements are very, very, very important refinements that will increase the already high-quality of the NAS, even to another level. And then, not only accuracy, but consistency. Making sure that there are consistent words so that you can connect the dots in a given passage, even from the Old to the New Testament. We’re going to call this new edition, “Legacy Standard Bible”.  Standard, because it’s a true pure formal equivalency word-for-word translation. And “legacy”, because we don’t think you need to keep changing the translation all the time. I’ve preached, basically, out of the same translation for 50 years. The only change came in 1995, when they basically took out thee’s and thou’s. Um, but very little else changed. This has been a standard for me for half a century.

By the way, the King James was the standard for 250 years. The tendency these days is to chase the translation. Because you’re chasing the vernacular.  And you’re never content because the vernacular of the culture changes and so you try to run after the culture, and maybe accommodate the culture in the translation. This is an inerrant unchangeable Word of the Living God. We want to take the best translation, refine it just a bit, and make it the legacy for future generations. So we have that opportunity.

So by next Shepherd’s Conference, 2021 in March, we’re going to give a gift to everyone who’s there, of the new Legacy Standard Bible. It will be a New Testament, Psalms, and Proverbs. And we’ll put it in a nice letter and cover, and maybe we’ll call it the “Shepherds Bible”. It’ll be a little format like this (showing about 5” wide with his fingers). I’ve carried one similar to that throughout all of my pastoral ministry. I’ve used it to shepherd lots of people on death-beds and hospitals and counseling and uh… it’s just the kind of Bible you can put in your coat-pocket or even in your back-pocket. So we’ll have those available by next Shepherd’s Conference, and soon after that – the whole Bible, of the Legacy Standard Bible. Really an amazing providence of God. I’ve never heard of anything like this happening where we have been given the privilege of doing that.

Dr. Abner Chou, who is a linguistic genius at the Master’s University and teaches at the Master’s Seminary as well, he’s kind of overseeing this group. Dr Will Varner, New Testament Greek scholar, Dr Jason Beals from the (Master’s) University, Dr Joe Zachvitch – a Harvard-trained Hebrew linguist on our faculty, and his brother Mark – trained at Master’s Seminary and in Edinburough, in the Greek language, and Paul Twiss, who also is a linguist – a UK guy, British guy – they’re all faculty at the Seminary and university.  And they are right now going word by word through the Hebrew, and word by word through the Greek, together as a team refining this Legacy Standard Bible. Really, an exciting thing.

We’re working hard. They’re telling me that by mid-June, they should have at least the New Testament, Psalms and Proverbs finished. And maybe by September, the rest. This is, uh, this is a fast time-table, but they’re working very hard and fast as well.

So, a treasure has been deposited with us, to make even better. And, we’re very excited to let you know about it. There will be some videos that come along to give you more details as time goes, so you’ll know exactly what we’re doing.

For all of you pastors who were a part of the Shepherd’s conference, we’re just trusting the Lord that you’re finding ways to minister to your people in this very bizarre kind of circumstance. There are many ways that you have a captive audience now that you didn’t used to have. They are maybe less busy, maybe less distracted, less mobile. Good time for you to encourage them to tighten up those family bonds and tighten up those close relationships that they already have with people who are intimately involved in their lives. And use some of their free time to be spiritually productive. This is a great time to encourage your families to start things in the home that they have never done in the past.

Everybody says – we’re so busy. We’re coming and going all the time. We can’t have a family Bible study. We can’t read through a book together. Well, you can now. So encourage your people to do those things. Encourage people to minister to one another. Encourage your people to care for the widows, and those who are older and can’t get out, and are a little bit afraid to go to shopping. Figure out ways in your church that you can serve them. I know you’re doing all of that.

If you want any help with ideas, give us a call, there will always be someone there to help you. And God bless you. We’ll see you on the other side of all of this.